The Quest Continues with The Throne of Fire 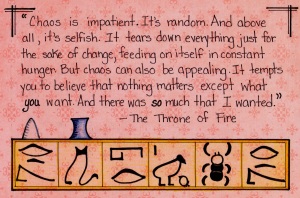 In The Throne of Fire, the quest to bring balance to the world and Ma’at continues, as evil forces gain power and Apophis attempts to break free from his prison so he can destroy the entire world as we know it. No pressure, Kanes! Thus, Sadie and Carter start their recorded narration with no preamble: “Look, we don’t have time for long introductions. I need to tell this story quickly, or we’re all going to die.” With only 5 days to find the lost Book of Ra, bring this senile god back from… wherever he is, and face Apophis as he rises… oh, while also either fighting against or joining forces with the House of Life (who is also currently trying to destroy them), Sadie, Carter, and their recruits are facing an impossible task. But impossible is what these guys (and gals) do best!

There are some new characters joining the Brooklyn House — including Jaz, the healer, and Walt, the charm-maker — who are holding their own under the Kane’s tutelage. But of course, the end of the world waits for no one, thus they must all try their best to fight evil and save the world. Sadie and Carter face some daunting challenges not only against their enemies, but with their own desires, and with each other. Still, Sadie manages to show she can hold her own, and make some odd-looking yet lovable friends (aka Bes). Meanwhile, Carter remains obsessed with finding Zia — but will she recognize him when she awakes? Their main struggle, however, is choosing what will be the best solution to the impending doom that awaits when Apophis rises: Do they go ahead and wake Ra, despite the fact he is old and weak and the gods don’t want him? Do they throw their support behind Horus? Should Carter take charge and rule? These are very difficult choices for teenagers who are barely dealing with the adult responsibilities already thrust upon them — albeit successfully.

In the end, they must simply take a leap of faith. Despite unnerving decisions, selfless sacrifices, and heartbreaking losses, the Kanes move forward. The future of the world is at stake, and so Sadies’ and Carter’s recordings go out into the world for anyone willing to listen and support the Brooklyn House at their most vulnerable time.

In typical Rick Riordan fashion, The Throne of Fire is a whirlwind adventure of constant suspense. We wonder about all kinds of serious questions: Are they making the right decision? Is this a trap? Why would anyone try to ride a double-headed snake? What’s with the zebras and the weasels? Who’d make a better boyfriend, Walt or Anubis?

Despite completing this part of the quest, much more remains to be answered — off to read The Serpent’s Shadow.