Stranded and Tortured… But Never Broken 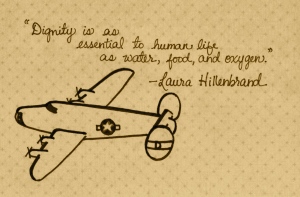 Unbroken by Laura Hillenbrand tells the story of Louie Zamperini — it is the beautifully recounted and well-researched biography of a very brave man, who not only survived unimaginable ordeals, but learned to live beyond survival, and truly carved a meaningful life for himself afterwards.

Louis Zamperini grew up as a poor Italian boy who stole, misbehaved, and got into way too much trouble… until his older brother decided he needed to channel his little brother’s talent for running away into something a bit more worthwhile: he trained him to run track. Louie was a natural, and his desire to take on challenges made him push himself until he achieved something he never would’ve thought possible: to race in the Olympics.

Unfortunately, World War II came along to draft most (if not quite all) young men in the country, Louie included. Hillenbrand recounts the statistics of men who lost their lives, not only in combat, but also due to all kinds of accidents, technical failures, and training errors — they are a sobering number. Sadly, Louie and his crew were part of these men who became victims of their own plane: a faulty B-24 — The Green Hornet. The plane malfunctioned, and they crashed into the Pacific. Out of the eleven men on board, only 3 survived the crash — they spent 47 days adrift at sea, living off rain water, fish, and birds… mostly starving, dehydrating, fighting off sharks, and talking to each other to keep themselves from going insane. One of them didn’t quite make it (he lasted only 33 days) — what was to follow, would probably make the other two wish they hadn’t made it either.

After surviving their ordeal at sea, the men were captured by the Japanese. Louie and his friend, Phil, were mistreated, to say the least: they were separated, beaten, practically starved, denied proper medical attention, psychologically tormented, and worked half to death at prisoner-of-war camps. They endured this torture for over 2 years until the war ended in August of 1945.

“On Kwajalein, the guards sought to deprive [the men] of something that had sustained them even as all else had been lost: dignity. This self-respect and sense of self-worth, the innermost armament of the soul, lies at the heart of humanness; to be deprived of it is to be dehumanized, to be cleaved from, and cast below, mankind. Men subjected to dehumanizing treatment experience profound wretchedness and loneliness and find that hope is almost impossible to retain. Without dignity, identity is erased. In its absence, men are defined by their captors and the circumstances in which they are forced to live.

[…] Dignity is as essential to human life as water, food, and oxygen. The stubborn retention of it, even in the face of extreme physical hardship, can hold a man’s soul in his body long past the point at which the body should have surrendered it. The loss of it can carry a man off as surely as thirst, hunger, exposure, and asphyxiation, and with greater cruelty.”

Surviving on the life rafts while out in the open ocean was quite a challenge — yet when Phil and Louie lacked water, they waited for rain; when they were hungry, they ate whatever they could get their hands on: fish, bird, or shark; when they were too weak to do anything else, they would talk to anchor their minds to their bodies so that they could live to see another day as lucidly as possible. But once they were prisoners of war, the Japanese soldiers sought to degrade them, deprive them of every basic human right imaginable, and to crush their spirit. Yet the POW’s found ways to keep their hope and will to live alight within these camps through small acts of defiance, by finding even the slightest bit of joy in whatever was around them: a funny duck, stealing sugar, putting on a silly play… even in the worst imaginable circumstances, a person can find a reason to keep going.

Louie wrote to his greatest tormentor, Watanabe in letter (after the war):

“It was not so much due to the pain and suffering as it was the tension of stress and humiliation that caused me to hate with a vengeance.

Under your discipline, my rights, not only as a prisoner of war but also as a human being, were stripped from me. It was a struggle to maintain enough dignity and hope to live until the war’s end.”

And yet, he held on… he did indeed live to war’s end.

Louis Zamperini’s story is impressive not only because he survived, but because his perseverance allowed him to continue living after his survival. Once the POW’s were rescued at the end of the war, they came home as heroes… but broken in every way: physically, mentally, emotionally… and Louie was no exception. Fortunately, after a long time, he found a way to heal… to forgive… and to give back to his community: he founded a camp for troubled youths, the Victory Boys Camp.

Although this life-defining tragedy lasted over 2 years of Louis’ life, he lived to the age 97. He passed away on July 2, 2014.

He lived quite a full, inspiring, and resilient life.

2 responses to “Stranded and Tortured… But Never Broken”