I Was Here is quite a departure from Gayle Forman’s usual novels — it’s rather dark and morbid, yet there is hope and strength in its message.

Cody discovers that her best friend has committed suicide. It was planned perfectly: she packed her things within her dorm, she rented a motel and left a hefty tip for the maid, she bought some super-strength poison that was guaranteed to work, and she sent her family a time-delayed email letting them know what she did. After looking at the message with Meg’s little brother, Cody realizes that letter is worded strangely, and wonders if Meg was actually covering up for someone else… someone who may have pushed her over the edge.

In her efforts to discover why her best friend would do such a thing without her having the slightest clue, Cody rehashes the months Meg was away at college — she had so much going for her: charisma, intelligence, a way with people, and knowing what buttons to push to make things happen… Meg was a tour de force to be reckoned with… so why would she think it was all hopeless? Why she do such a thing without confiding in her best friend? As Cody digs through Meg’s emails, she enlists the help of her distant roommate to hack and track down all kinds in information in not-exactly-legal ways, questions other people in Meg’s life, and meets the Tragic Guitar Hero: Ben McAllister.

For Cody this is quite a change: heading out of her small town, talking to people she normally wouldn’t, questioning people’s motives in the search for truth, confronting her own weaknesses and fears, and coming to terms with her own insecurities about life and where she’s headed. Since they met in Kindergarten and became two peas in a pod, the idea was: Meg and Cody forever. But now it’s just Cody… asking the questions, confronting strangers, making new friends, learning to rely on others for help. Her search into Meg’s death is truly what defines Cody’s strength and will to live.

“Life can be hard and beautiful and messy, but hopefully, it will be long. If it is, you will see that it’s unpredictable, and that the dark periods come, but they abate — sometimes with a lot of support — and the tunnel widens, allowing the sun back in. If you’re in the dark, it might feel like you will always be in there. Fumbling. Alone. But you won’t — and you’re not. There are people out there to help you find the light.”

Cody’s all-consuming obsession with Meg’s death might seem morbid, but what else would be expected from a person who loved her friend? She needs answers… and in her own way, finds them.

Gayle Forman touches upon something not too many people talk about: depression, suicide, loss… but the story is mostly about hope, and resilience, and reaching out. Though there are dark moments, life’s unpredictability means there’s also a chance for light at the end of the tunnel… and that in confiding in others, we may find the understanding and support we all need to keep going. 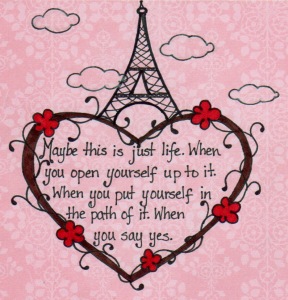 I love Gayle Forman. She is exactly what I need to read from time to time. She knows how to craft a story that makes you think… then pulls you in and takes you on a crazy ride…. only to stop abruptly and leave you thinking, WHY?! Fortunately, in those instances, there’s a second book you can quickly turn to so you don’t go absolutely insane.

I read Forman’s If I Stay — and immediately had to read, Where She Went…. because well, I needed to know where she went after she decided to stay. You know!

Most recently, I read Just One Day. It’s about Allyson Healey, who graduates High School and will soon be going to college. She’s your typical over-achiever — her parents adore how perfect their only child is. She is responsible, and predictable, and would never ever do anything wild or unexpected… until of course, she does. She meets a guy… she runs off to Paris for a day with this guy… her heart is completely and irreparably broken by said guy.

At first I wasn’t sure why Allyson was so heartbroken — after all, she seemed so… reasonable and mature. Her constant moping, failing all of her classes, and refusing to socialize made me wonder about her mental stability… until I got it: it wasn’t about Willem… it was about her own self-discovery. She wasn’t so much heartbroken about his disappearance (although that was clearly the catalyst), as she was about no longer being able to recapture who she became when she decided to spend the day with him. She had taken control of her own life, she had dared to follow her heart to Paris, and as soon as she discovers how happy taking charge could make her… well, everything went horribly wrong, and she had to head back with her tail between her legs, utterly humiliated. It made sense…

“He showed me how to get lost, and then I showed myself how to get found.”

So Allyson changes gears, works hard, and gets herself back to Paris for the search of a lifetime — which ends abruptly just as I was hoping for some closure. But that’s not the Gayle Forman way… so I instantly had to start reading Just One Year — from Willem’s point of view. His side of the story, his (very good reasons) for disappearing, his explanations for being a roaming traveler, his own search for the girl who got away… whose real name he didn’t even know.

Willem’s story goes much deeper than anything Allyson (or a reader looking at things from her point of view) could’ve foreseen. There’s so little he’s willing to give away– so little he lets slip– when he is with her. But there are clues. And with the minuscule bits of information he gathered about his “Lulu,” he searches for her…

“I’m not sure it’s possible to simultaneously love something and keep it safe. Loving is such an inherently dangerous act. And yet, love, that’s where safety lives.”

Oh! And there’s a lot of Shakespeare, too! It’s what brings them together… over and over again, in different ways, but the connections are there… and they are quite romantic (in the awesome young-adult fiction sort of way).

Lastly, once I inhaled both novels I was rewarded with the additional (and separate) chapter, Just One Night. I doubt that needs any further explanations….

In short: this is a wonderfully entertaining love story about accidents, coincidences, serendipity, and timing!