A Trilogy Comes to an End with The Serpent’s Shadow 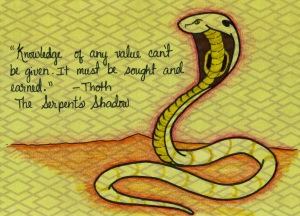 The Serpent’s Shadow brings the Kane Chronicles to an end as the third (and “probably”) final recording of Sadie and Carter. Just like the previous two novels, this one has a great hook:

“Sadie Kane here.
If you’re listening to this, congratulations! You survived Doomsday.
I’d like to apologize straightaway for any inconvenience the end of the world may have caused you. The earthquakes, rebellions, riots, tornadoes, floods, tsunamis, and of course the giant snake who swallowed the sun — I’m afraid most of that was our fault.”

So there you have it: Apophis swallowed the sun! That’s one burning question down, and a whole lot of others to go — like, how did they survive Doomsday if the snake got away with his plan? Well, I guess that’s when you need to read and find out.

However, I did have some other very serious questions at the end of The Throne of Fire:

Are they making the right decision? Despite Ra being a crazy old guy who played with cookies, he was rather needed.

Is this a trap? Everything’s a trap! You need to go with it anyway.

Why would anyone try to ride a double-headed snake? Clearly this earned Carter some serious street cred. It was totally necessary.

What’s with the zebras and the weasels? Well, Zebras are clearly awesome and Ra’s very favorite… and Weasels are sick… though not beyond salvation.

Who’d make a better boyfriend, Walt or Anubis? The answer is… YES.

So many things go wrong as Doomsday approaches — go figure. Sadie and Carter, along with Walter and Zia, the Brooklyn House, and any stragglers… er, supporters, of the First Nome, must fight the greatest threat to human kind. What could possibly go wrong? … Well, they survive to tell the tale, so clearly a few things go right.

The Serpent’s Shadow is driven not only by the impending deadline of the end of the world — as Sadie and Carter search for a way to defeat Apophis and vanquish him– but also by the characters’ interactions, hilarious events (just imagine a kindergartener running around with crayons, screaming “Die! Die! Die!”), and senile senior gods who just want to partake in the fun of fighting the forces of chaos. The third and final installment of this trilogy may not tie everything into a neat little bow (because we know Rick Riordan loves his loose ends… as do we, since it leaves the possibility of continuing the tale), but it is a satisfying end.